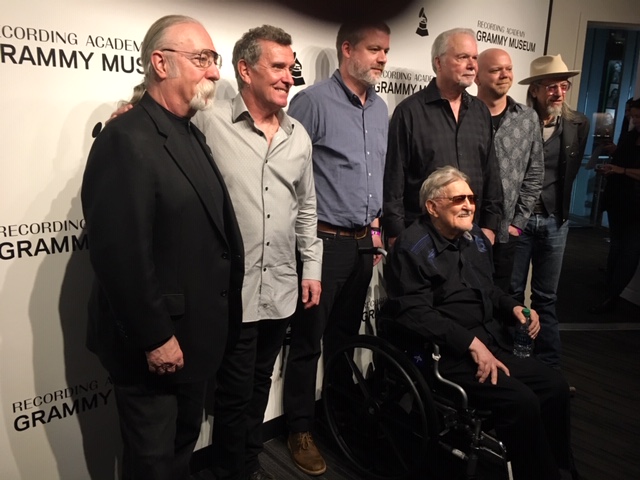 On the evening of January 9, 2020, the Grammy Museum in downtown LA at LA Live! (close to the Staples Center) hosted a wonderful evening to celebrate The Ventures’ exhibit at the Museum.  The audience was treated to a great evening with historical information on the group, a lot of technical information about electric guitars, introduction to the current members of the group, who were all in attendance (Leon, Bob Spalding, Ian Spalding and Luke Griffin), as well as – of course – to Don Wilson.

The evening started with a presentation with Scott Goldman as moderator for the Grammy Museum, with special guest, Jeff Baxter (Doobie Bros, Steely Dan) and me, Fiona Taylor as manager of the group, talking about historical events, background on the group, the broad spectrum of music played by The Ventures over their 60-year history, and much more.

Jeff then played two tracks from recording sessions he made with The Ventures in the 1980s which have never been released.  First of all, “When You Wish Upon A Star” with Nokie on lead which, as Jeff said, “will bring tears to your eyes”.  Then a live recording made at Trancas in Malibu with Gerry McGee on lead and Don singing vocals on “Runaway”!  The audience was ecstatic!  (We are hoping there will be a release in the near future because these tracks are absolutely amazing and show the depth of musicality exhibited by The Ventures’ members.  The tracks have been restored and would be something that every Ventures fan would want to own).

Jeff played a video specially taped by Billy Bob Thornton who had recorded with The Ventures about 15 years ago – he paid tribute to all the members of the group with a special nod to Don.

Then the current members were introduced and joined me on the stage for more questions about joining the group, touring, recording and anecdotes.

The presentation was capped off by a live performance by the group, very much enjoyed by all in attendance.  After the show, there was a reception upstairs so that the guests could view the exhibit and “mix and mingle” with the group and family members and friends.  It was a fantastic evening.

We are hoping that there will be another event coordinated with the Grammy Museum, some time in the summer before the exhibit closes at the beginning of August.  Details will be posted when available.