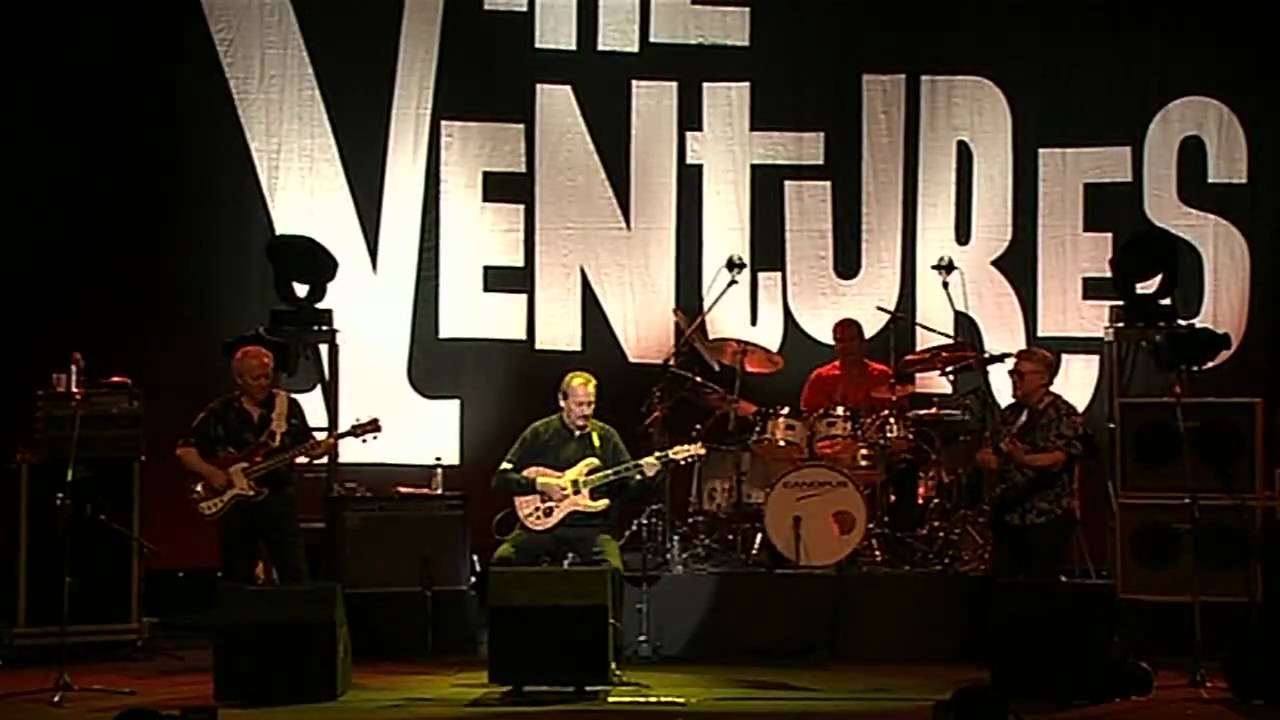 Dave Towers reports on his experiences this year on tour in Japan The Ventures 2016 Summer tour began with a 6.30pm show on Thursday 21st July at Nagoya Shimin Kaikan (Civic Centre) situated in the suburb of Kanayama. This year’s set list was very different featuring five new original Ventures compositions including three from the new CD ‘Hits and New’ (Pony Canyon MYCV-30654). In fact the new CD proved very popular and was sold out at several of the shows I attended. Also in the set list were three numbers that I do not recall hearing the Ventures play live before – ‘Plaquemines Parish’ from ‘Swamp Rock’, ‘Gimme Some Lovin’ and the Duane Eddy classic ‘Ramrod’. Nagoya Civic Centre was a big theatre and 1,600 turned up to see the show.

On Saturday and Sunday there were 5.00pm shows at Narashino Cultural Hall, an eastern Tokyo suburb, and at Ashikaga Civic Centre – a 90-minute journey by road into the northern Tokyo suburbs. Monday was a day off from the tour in readiness for a 2�-hour road journey on Tuesday 26th to and from Komagane Cultural Hall for a 6.30pm show. At some pre-show sound checks it was decided to make some changes to the set list. ‘Driving Guitars’ now opened the show, ‘Gimme Some Lovin’ was moved into the 2nd set and ‘Hawaii 5-0 was moved further down the 1st set. Some changes were also made to stage dialogue and introductions.

On Wednesday 27th the Ventures travelled by train 200 miles north to Niigata for a 7.00pm show at Niigata Terssa which meant moving from their hotel in Shinjuku, a western Tokyo suburb. Usually the Ventures commute to this venue from Tokyo on the bullet train, but this time they had a three-hour journey by road the next day, Thursday, to the north western city of Sendai for a 7.00pm show at Tagajo Civic Centre, a few miles out of Sendai City Centre on Friday 29th July.

The Ventures then had a rare Saturday without a show and they made the 200-mile journey by train to the north west city of Akita in preparation for a 5.00pm show on Sunday 31st at Yuzawa Cultural Centre – a 60-minute journey by road from their Akita hotel.

Monday 1st August was a travel day to Sapporo on the northern Japanese island of Hokkaido. The Ventures travelled by Japan Airlines, but I made the 500-mile journey by train travelling some of the way on the new Hayabusa Shinkansen Bullet train service to Hokkaido that began in March this year. The total journey took 8 and a half hours, but I can use my JR Rail pass for all journeys on JR trains. The Ventures do not qualify for this pass, because it can only be issued to someone with a temporary visitor (tourist) stamp in their passport.

Hokkaido does not suffer the stifling heat and humidity of much of Japan in summer and it was a welcome relief for a few days. On Tuesday there was a 90-minute journey by road south to Tomakomai Civic Centre for a 6.30pm show followed by a 6.30pm show at Nitori Hall, Sapporo the next day – Wednesday 3rd August.

The next show was near Osaka on Friday 5th, 1,100 miles south, where we would encounter hot, steam bath weather conditions again. So on Thursday the Ventures travelled by All Nippon Airways from Sapporo to Osaka, but I took the train again – three trains in fact – staying overnight in Tokyo, before continuing to Osaka the next day. The whole journey took 12 hours and would have cost $600 without my rail pass. Friday’s show was at Takasago Cultural Hall at 6.30pm – 90 minutes by road from their hotel in central Osaka. Next day, Saturday 6th, there was a 5.00pm show at Souraku-gun Keihanna Plaza – a shorter 45-minute road journey.

Next day, Sunday 7th, the 4.00pm show was 120 miles north at Sakai-shi Heatpia near Fukui, a 2-hour ride on the Thunderbird Limited Express. After the show the Ventures still had two short train journeys to their hotel in Toyama, while I stayed in Fukui continuing to Toyama the next day Monday 8th August, which was a day off from the tour.

The 7.00pm show at Kurobe International Cultural Centre on Tuesday 8th would be my last on this tour. Wednesday August 10th was a travel day for the 250-mile train journey back to their Tokyo hotel, while I continued on for further 40 miles to Narita Airport for my flight home to England tomorrow Thursday 11th August.

Japan is mostly hot and humid in summer and I travelled almost 4,000 miles in the three weeks I was in Japan. Thank you to the Ventures for allowing me the free run of all those wonderful theatres.
Sayonara.