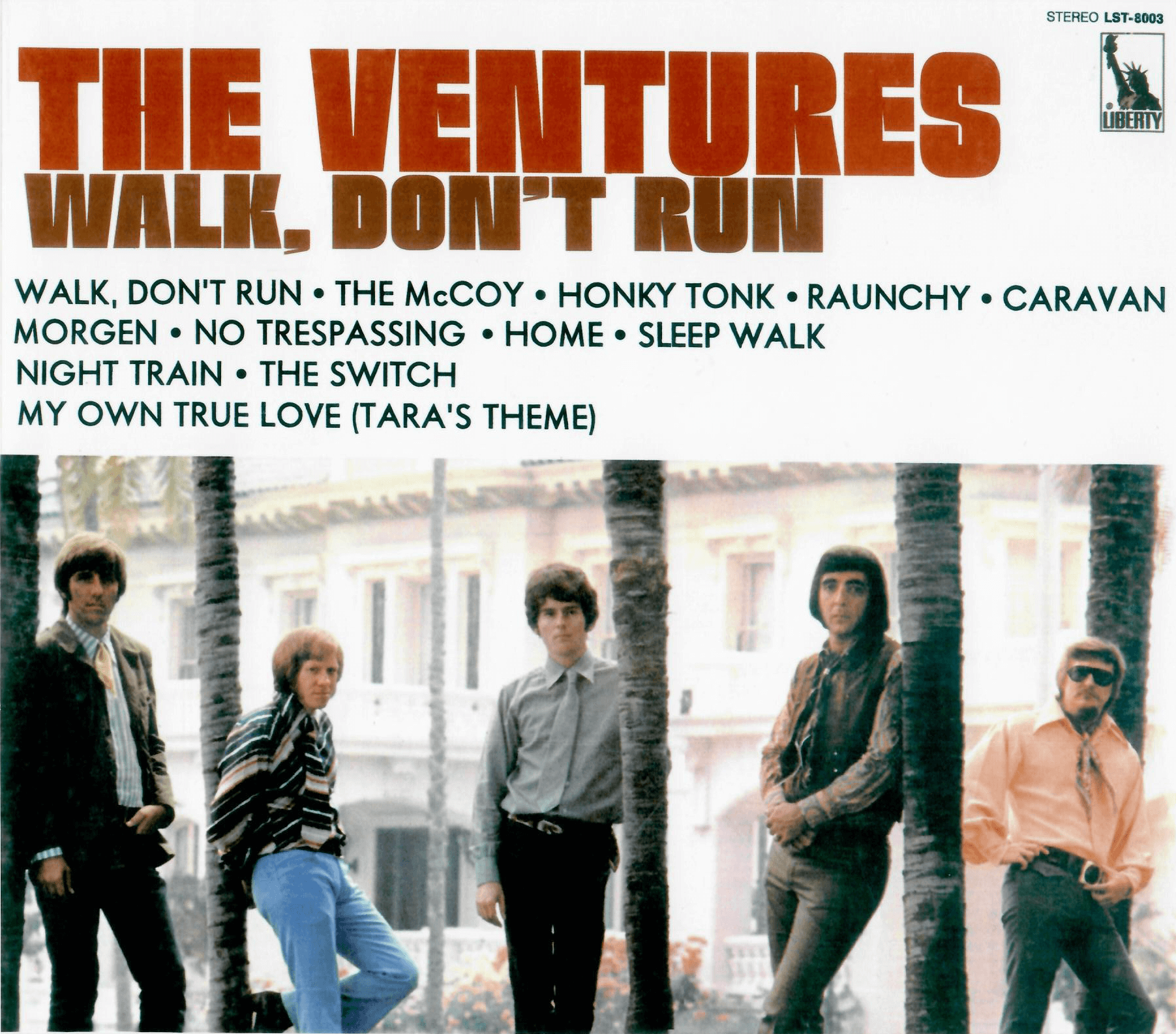 From the moment I received word of Don’s passing yesterday, January 22, 2022, I have been reflecting on so much of the parts of Don’s life to which I have been privy. I immediately thought to myself – first, “Do you realize it has been almost 50 years since you met The Ventures?”, then “How is that possible?” When, in a chance encounter in Osaka, Japan on August 1, 1972, I saw The Ventures’ members for the first time, crossing the lobby of the Osaka Grand Hotel, I obviously had no idea that, all these years later, my life would have been bound up with the group from that point forward. I met Mel and, of course, was then introduced to Don, Bob and Nokie. I saw my first Ventures’ concert a few days later, at Osaka Festival Hall. I was amazed: I, coming from the UK not the US, was not really familiar with The Ventures or their music, except peripherally – sure, I knew who The Shadows were but had not been exposed to The Ventures – yet! Remember that, back then, there was no social media and, since I was also in show business, I didn’t have a lot of time to spend watching TV shows or going out to see concerts because I was working. In Japan at that time, there were no English-language programs and I remember watching Dracula in Japanese (and making up my own dialog since I couldn’t understand anything).

In any case, within a very short period of time, I came to know all the guys in the group and was made to feel very welcome. Don was friendly and a lot of fun, as were they all – Don always loved telling jokes and doing impressions and he was pretty good at it! I became part of the entourage over the next couple of months and was very sad to say goodbye to them all when I had to go on the next leg of my tour. Less than two years later, I moved to Los Angeles, and have lived here ever since. Although Mel was away from The Ventures for several years in the latter half of the 1970s, he was still in touch with Don and, at the end of the decade, Mel rejoined the group and their friendship was further cemented. They collaborated on touring, recording and every facet of The Ventures’ career. There were highs and lows, celebrations and tragedies, as there are for everyone. I remember Don having parties at his house and, for anyone familiar with their album covers and publicity photos, many will have had glimpses of Don’s house, inside and out. There were photo shoots around the pool table and in the back yard. Rehearsals for recordings and prior to tours almost always took place at Don’s house which was Ventures’ Central for many years. Don was an animal lover, in particular cats – at one point, he had two – one female white cat (who disappeared one day, probably prey to a coyote) and an ultra-furry black cat known as Little Boy. Little Boy always knew when Don was leaving for a tour and would make his displeasure known at being abandoned! There were unsolicited animals around too – one day, the cat door into the house was used by raccoons – Don found them feasting on the kitchen floor! Getting rid of them was no easy task!

Talking of the kitchen, Don loved to entertain and definitely enjoyed food! He had his favorites – I found a recipe at home the other day for Don Wilson’s Chili – I think I’ll make it one day soon although I remember it being spectacularly hot (but I think that depends on how many chilies you put in it).! In Japan, he had his favorite restaurants and, when the band stayed in Shinjuku at the Hilton Hotel, he would often go to a little nearby place to get Chahan (a staple fried rice dish) – in fact, I think that Japanese TV featured Don going there to eat on one show! Thinking back – way back – I remember that, shortly after I met the band, we were all invited to a wonderful steak house near Roppongi in Tokyo where we all had Kobe steaks (well, wouldn’t you?) He loved that too. Don used to poke fun at himself when it came to food – one of his perennial jokes (which many will remember having heard at live shows) was that he would say “I’ve gotten a little older, put on a few pounds along the way … most people eat until they get full – I eat until I get tired!”

During one tour of the East Coast, The Ventures’ motor home caught fire while they were driving on the turnpike in upstate New York. The quick-thinking crew pulled over as soon as they could and uncoupled the trailer with all the equipment. Mel, Bob, Nokie and Don managed to scramble out but Don broke his heel in the process. The motor home itself burned to the ground and, along with it, all the guys’ clothes and personal items including – unfortunately – most of the money they had collected at the various gigs (cash was always preferred as payment but cannot be replaced once it has burned up). If you watch the Ventures’ video “30th Anniversary Super Sessions”, you will see Don is seated on a stool – because of his broken heel.

When Mel and I got married, Don was Mel’s best man and Jan, Don’s wife, was my maid of honor. I’ll never forget that day! A celebration to be sure.

Around 1990, after a several-year hiatus, The Ventures were once again welcomed back to Japan on a regular basis and resumed touring for months at a time every year. The group was honored to be invited to participate in Kohaku Uta Gassen, the traditional annual NHK TV New Year’s Eve show which is somewhat of a contest between teams of Japanese artists – the White team being male artists and the Red team being females. Very few non-Japanese artists are asked to participate but, in 1991 (I think – or was it 1990?), The Ventures, Andy Williams and Sarah Brightman were invited. We all (that is, all the band members and wives) went over to Japan for a rare winter visit. That was definitely one of the celebrations too!

Of course, one of the low points and tragedies was Mel’s passing in 1996 – I know that both Don and Bob were devastated at the loss and they were very good to me. Being asked to act as manager for the group and to take over some of the work that Mel had done for a number of years was a bit daunting at first but it has been an honor too. I spoke very often with Don as you can imagine as he was always very much hands-on with recording and touring. There was always hard work for the group – the performing is what makes the traveling, the rehearsing and all the background work worthwhile. I will always remember that, for Don, getting back on a normal schedule after months in Japan was extremely difficult – he really used to suffer with jet lag!

Don loved to talk with fans and always enjoyed meeting them whenever and wherever. In Japan, there have always been fans lined up outside the concert halls after the shows wanting to get autographs and just shake hands – Don never said “no” at least not to my knowledge!

In the last couple of decades, since the dawn of the 21st century, The Ventures were finally inducted into the Rock and Roll Hall of Fame and nobody was more excited about it than Don! The experience at the induction ceremony was, in many ways, worth the wait! Prior to that in 2004, The Ventures were honored by the Government of Japan with an award for their contribution to the culture of Japan, at a ceremony held in Seattle by the Japanese Consul-General: this is just one of many awards made by the country and people of Japan to The Ventures, dating back to 1970 when they received recognition for the songs they had written for the Japanese market which have since become standards that show up in karaoke books everywhere. Don took a lot of pride in such awards, as well he should have – and as all the group members did.

I saw Don grieve at the passing of his partner, Bob, in 2009 – it was a particularly hard transition, I think, because they had accomplished so much together during their musical life and had seen and experienced joy and pain, good times and bad. Then, in the past few years, when we lost first Nokie, then Gerry, it also hit him hard – on more than one occasion, he said to me “You know, I’m the only one left – why?” There was no answer.

So, here we are, now living with the knowledge that Don, too, has left us. He lived a long life, saw more during his life than most people could possibly dream of and now, I hope and pray, he is at peace and reunited with his friends and family. That is about all any of us can ask for. I will remember you, Don, with your cheeky smile when you told those jokes! When Mel passed away in 1996, Don’s mother, Josie, wrote a beautiful tribute to Mel that ended with the words “The drums are silent”. So now, I say for Don, “The guitar is silent”.