Mel Taylor & The Magics In Action 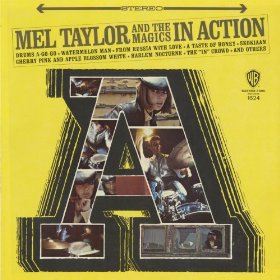 WARNER BROS. JAPAN WPCR-27820
THIS IS A BUDGET RE-ISSUE OF THE 1966 VINYL LP RELEASE. LIMITED AVAILABILITY

Points of interest: Tracks 4 and 11 were composed by Danny Hamilton who collaborated a number of times with The Ventures during this time period. Track 10 was also recorded by The Ventures and was written by Don Wilson, Mel Taylor, Bob Bogle and Nokie Edwards. Gerry Woodage, the late UK fan-club President, used the nickname “The Creeper”!